At Banner we go beyond our amazing products.

We encourage our people to achieve great things by giving their time to worthwhile causes. Here are some of the employees who have been giving something back.

Offering ShelterA winter shelter has been making a big difference for homeless and vulnerable people in Milton Keynes, and one of our key account managers, Simon Eady, has been playing his part.

For the last four years, Simon has been helping out at one of seven winter night shelters. These were set up by churches in the city as a response to urgent need during the severe winter of 2010, when Milton Keynes Council became aware of homeless people sleeping in bin stores and other outdoor places around the city, despite freezing temperatures and thick snow on the ground. 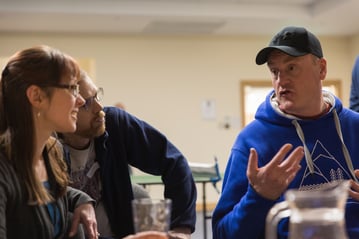 The night shelter supports the homeless, vulnerable and people with mental health struggles by providing temporary emergency accommodation from November to March. With around 80 volunteers, it also has a dedicated welfare team providing year-round support, access to showers and washing and drying facilities, links to accommodation and pathways to employment.

Simon said: "I found out about the night shelter through the Christian motorcycling group I'm part of. I usually do the evening shirt on Sunday nights, and help however I'm needed, from moving furniture around to sorting out donations. I do it because I want to help these people and because many of us are only one pay cheque away from this situation. It's one of the most rewarding things you can be involved with."

Banner has supported Simon by donating a supply of mini toiletries and arranging delivery of 230 multi-packs of Nestle chocolate bars.

Simon said: "People's generosity is humbling and donations by companies like Banner make a big difference. It's nit just about food. Toiletries can make a big difference to guests' personal hygiene and wellbeing. We were recently able to help 32 girls go back to school by helping them get the hygiene items they needed. It's also a big help when people donate items like socks and scarves in winter and sun-cream and winter in summer."

In the winter of 2017/18, the night shelter served 3686 meals, accommodated 69 people, helped 40 guests to move on to longer term accommodation and helped 8 guests to find employment opportunities.

It got more than a bit competitive when people at our Sheffield and Normanton offices took turns to pedal on static exercise bikes as part of a 'pedal the Pennines' event. Banner's budding bikers took to two wheels to raise funds for Breast Cancer care, pedalling a 350-mile virtual route between them over two days. 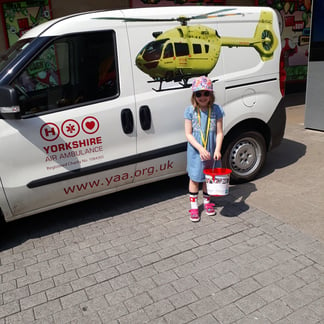 One of our bids and tenders executives, Gemma Murray, was among several Banner employees who volunteered at the Tour de Yorkshire in support of Yorkshire Air Ambulance. Our willing volunteers collected for the charity all four days, in Pontefract, Ilkley, Scarborough, Doncaster and Leeds.

Gemma and her five-year-old daughter Holly (pictured) did a bucket collection in Leeds city centre and handed out sweets, hats and banging sticks. Gemma said: "It was great fun, very warm, and there were thousands of people. It was a fabulous atmosphere."

Kiera Jeffs, who works in customer services at our Normanton office, helped to raise over £11,000 for Cancer Research by trekking an incredible 30 miles from Huddersfield to Manchester.

Kiera was one of a team of British Military Fitness members that carried two stretchers along the Pennine canal route, on one of the hottest days of the year. The stretchers were loaded with 45 kilogrammes of food, water, first aid supplies and champagne.

Kiera said: "Our class leader Matt created the challenge to set us all a goal and raise money for this fantastic cause. The weather was much hotter than during training, which didn't help, but there was a real team vibe, with everyone playing the part. The £11,000 we've raised is still rising, which has made it worthwhile." 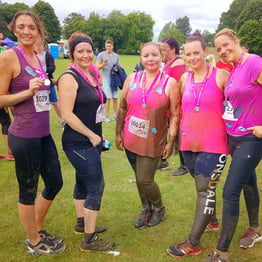 They were mighty fierce. Racing under the name of 'E-Commerce Warriors', Lanna, Michelle, Nikola, Philippa, Rachael and Sarah from our e-commerce team took part in Pretty Muddy in Wakefield to raise funds for Cancer Research.

The team has taken park in Race for Life events for many years, but this was their first ever Pretty Muddy event.

Roar on the water

Huge crowds flocked to the Bradford Dragon Boat Festival to watch more than 110 teams, including one from Banner, take to the River Aire in Saltaire.

In glorious sunny conditions, the teams raced three times in support of the Lord Mayor's Appeal, raising money for the Down Syndrome Training and Support Service, the Wishing Well Appeal, and other charities.

Banner's 14-strong team came an impressive 11th out of 39, which, considering their claim to have done no training at all, and that the top two teams were professionals, is a great result.

One Banner team faced the trial of trials last summer. 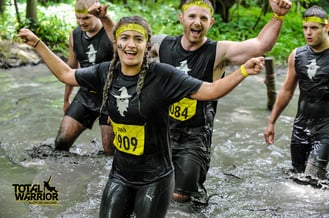 Among those who took on the Total Warrior Challenge were Alexandra Milano-Tee, Natalie Skeene, Eric Mountain, James Stables and Carrie Walker. This saw them face down a 10K course with an incredible 25 punishing obstacles along the way, including ten tonnes of ice and 100 tonnes of mud. They took on the epic adventure in aid of the Children's Heart Surgery Foundation.

The Foundation raises money to help the Leeds Congenital Heart Unit at Leeds General Infirmary care for children born with congenital heart disease and their families. Because it has been providing invaluable support to one of our employee's families, this has become a personal cause for many at Banner.

If you would like to read about another Banner employee who's been giving something back, please read Helping the Homeless on our Banner blog.